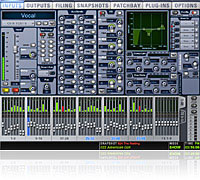 Well, I found our upgrade kit in the receiving room today during a break in a rare Monday afternoon rehearsal.  As you might have guessed, as soon as rehearsal was finished I installed the new version.  I only spent about 20 minutes on the new software, but I’ve spent some time on the standalone software so I have a pretty good feel for the new software.  I was initially underwhelmed when I started working with the standalone software, but I’m pretty happy with the new version after a little bit of time using it on the actual console.

There are some small things that got added to the new version that might go unoticed for some users, but they’re kind of nice for me.  For starters, the faders have chilled a little when you switch between banks.  This is nice for us because sometimes we are operating in a quiet environment and the faders would move almost too fast previously and click when they hit the lowest point in their throw.  I’m wondering if they’re going to move too slow for me now, though, but time will tell.  The addition of the ability to add the system clock to the display is also nice.  They have also made the alert messages in the information window at the bottom of the display smaller so you can still see information displayed; the info used to get covered up by the alerts, and activating solo-in-place brings up an alert so this makes things much easier in our world now.

The biggest add for me is the added flexibility for the PQ and Matrix mixes.  PQ’s are Digi’s version of the Aviom, but I use them as stereo matrixes.  The Matrixes are mono.  In v2.5 you can select from a variety of sources for the Matrix and PQ mixes including all auxes, groups, and 8 user assignables which can be pretty much anything on the board including individual channels; previous versions were restricted to groups or auxes.  There is a lot of flexibility here now.

The biggest new feature seems to be the Events Manager.  So far, I’m not quite sure what this give us.  It seems like a great add, though, because I can start to imagine them adding a lot of things to the Events Manager area in the future.  However in the meantime, this seems like something that is more tailored to the new Digidesign Profile control surface that runs on the Venue platform.  The main benefit for me, though, is that I can configure the function keys to do whatever I want.  So far I’m leaving all of them the same as they were except I added a function to the previously unused by me “F2” key.  I set it up to unlock the fader banks between the sidecar and main unit for me.  I’m excited about using this for Christmas Eve this year because we’re running 40+ channels for music, and I’ve got it all laid out nice.

I do have one big disappointment, and that’s with the new channel preset feature.  You can now store presets for entire channel strips, but unfortunately it doesn’t include plugin settings.  A year ago I would have loved this, but these days I have plugins running on just about everything I would want to store a preset for.  I could really use this, too, because our players are swapping out every week; we rarely get the same band twice.  I’m sure plugin storing will get added at some point, but in the meantime I won’t be using this.

There are some other little adds like the ability to lock snapshots and center the currently selected snapshot in the snapshot display on the snapshot page.  I’m sure I’ll discover more stuff as I play a little bit more this week.  The software was already incredibly powerful, and now there are some nice new touches to it.  While I still love mixing on an analog desk, my preference is still for the Venue.