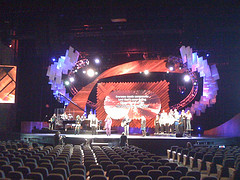 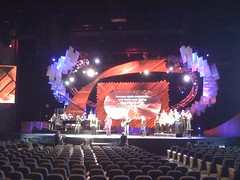 Last weekend I had the privilege to hang out with Scott Ragsdale and the rest of the production folks up at Willow Creek for their Sunday morning services. It’s always a lot of fun talking shop with those guys, and the morning was no exception. One of the highlights of the morning was definitely Bill Hybels telling the congregation to quit complaining about volume; he was at the U2 show in Chicago the night before and talked about how his ears were bleeding at the show.

The biggest thing that stood out to me on the audio side was the vocals Ragsdale had dialed in. There was a sweetness and natural smoothness to them that I was digging when one of the worship leaders was singing. After explaining how he was handling his vocals, I started getting some ideas of how to play with my own vocal mixing. Willow’s FOH console is a Yamaha PM1D, and outside of channel EQ he was doing a little bit of compression on the channels. On the side, however, he had a stereo 1176 that he was using across a group of all of his vocals. He wasn’t hitting it hard, either, maybe 3-4 dB compression max when everyone was going. The result sounded real nice, and Ragsdale gave me an idea to try on my own vocals.

So I’ve been using parallel compression on my vocals for a while now where I bus my “normal” vocal to the mains and then bus it to a group that gets crushed/spanked and also routed to the mains. Then the spanked group then gets brought up under the normal vocal. The idea is you maintain the original performance while smoothing the dynamics a bit and raising the average level of the vocal. A lot of times it’s actually been a cheat for me to get enough vocal within the limited headroom of our current PA. The problem, though, is that sometimes when you do a lot of heavy compression on the spank group you can have weird tone things happen with the vocal and can end up chasing yourself around in circles to get EQ right. This gets further complicated when you don’t want to use the same amount of spank on every song.

So watching what Ragsdale was doing got me thinking about how the parallel compression I do on my drums isn’t overly heavy these days and how when I lightened that compression it helped me get what I was originally going after on the drums. So I’m starting to play around with taking the same approach on my vocal spank and not hitting the group as hard. I’m trying somewhere in the range of 3-6 dB to start.

We tried this a bit over the weekend, and I played around with it a bit more today using some old tracks from a few Sundays ago. I experimented a lot popping the vocals in and out of the different busses to see how much I was really leaning on one or the other, and I was pleasantly surprised how each version complemented each other and contributed to the overall vocal in the mix. I was also liking some of the flexibility I was getting by relying on one bus or the other which I couldn’t do when the spank group was literally spanking the vocal. What I’m heading towards is still a form of parallel compression, but not in the traditional sense since I’m not smashing things into oblivion.

Time will tell where I end up with this, but I’m pretty excited to experiment with it to the point that I modified things in our templates today. I just have a feeling I’m on to something I’m really going to like. I’ll see what happens over the next 4-6 weeks, but if it doesn’t work I will try and remember to post about it.