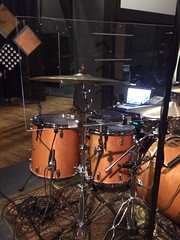 I’ve got a new technique I’m working on, but it’s not there, yet. This is a little complicated, and if you haven’t got a good handle on fundamental mixing I’d skip this. For the rest of you who would like to play and help refine this idea or simply come up with something better I can steal…err…use, read on.

One of my biggest ongoing struggles is cymbal bleed in tom mics, and in particular the floor tom mic. I have no qualms about gating my tom mics, and in many cases this works fine for me. The trouble is I find it very difficult to get gates set properly in so the toms sound natural without hearing cymbals pop in and out or just getting messed up in general when those tom mics open up.

For example, sometimes the last hit in a drum fill is the floor tom followed by a cymbal crash on the downbeat. That crash will often bleed in on the tom mic as the gate on the tom is often still open, but as it starts to close it can suck the crash sustain down unnaturally. A faster Release on the tom gate is the normal solution, but that can compromise the sustain of the tom at other times. In a studio environment, I have tools and methods to clean this kind of thing up to a degree that I don’t have when I’m mixing live because I can manually edit things there. So I’m working on a way of replicating some of that in “automated” fashion because it drives me nuts when there are things I can do in the studio that I can’t do in the live arena.

You’re going to need two channels for each tom you want to try this on, and here’s the procedure I’ve got so far:

1.) Dial your tom in on the first channel so it sounds great. EQ and compress to taste, and then dial in the gate. You want the gate set up so you have the most natural sound you can possibly get from the tom. This will probably require a pretty long Hold and/or Release time to achieve, and don’t worry if you make these times longer than you are used to. Just make sure you aren’t cutting off any of the drum’s natural sustain, and also make sure you aren’t losing any attack or snap on the drum that you’d like. Depending on how reverberant your room is, you might want to fine-tune this in headphones.

2.) Copy all the settings/processing from your first tom channel onto your second channel. The two inputs should be completely identical. Designate one channel “high” and the other channel “low”.

4.) Now go back to the gate settings on the “high” channel and set the Release and/or Hold time to be pretty fast and maybe even as fast as they can go.

So what does this get us?

Well, we get the natural sustain and release on our “low” channel, but our “high” channel’s gate should only open up for a brief moment for the attack of the drum. I’d I’m getting about 80-90% of what I’m hoping for right now, but I still get some cymbal bursts from time to time that bug me. Playing with the release settings on the high channel can help with this as I can tailor it specifically for the cymbal sustain, but I’m still not satisfied. Plus, I have also noticed the “high” channel gate can chatter too much at times. I’m not sure if I can make this any better, but maybe someone else can.

I should mention I’ve tried doing this concept a few different ways. I’ve tried multi-band comps using the high band in an expander capacity, but that doesn’t quite work the same because that band only responds to that band. So if the cymbal bleed is relatively loud–and it often is with some drummers–it’s very difficult to get the band to respond only to the tom’s attack, and I need the band to respond to the entire tom hit.

Now, the Waves F6 allows you to key any filter off the wide-band signal, but the response still isn’t what I’m looking for because the expanding nature doesn’t give me the clean, always the same amount, opening of a gate. I’ve used the F6 like that on snare drums to tame hi-hat bleed with success, but in this case I’m looking to get as close to completely eliminating cymbals as possible. It’s probably a fantasy right now based on the tech I have available to use in a live situation, but I’m not ready to give up.

So, if you experiment with this, I’d love to hear how it works for you because it is a work in progress for me. OR, if you have another idea or technique that’s been working for you, I’d love to hear that as well.

One Response to “Bleeding Toms”