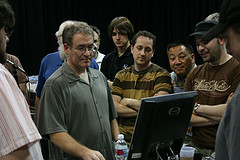 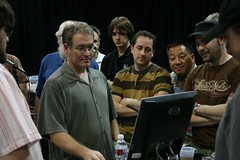 I meant to write this a couple days ago, but then it’s probably a good thing I waited. The course was described as “drinking from a fire hose”, and while I’m not sure that’s entirely accurate for me, it is definitely close. I’ve sort of been processing things for the past several days and trying to formulate a plan for implementing some of the many things I picked up. I have a stack of notes I still need to go through, so this week I’m simply starting with what I remember and what stuck out the most.

The bottom line of the course is this: Great mixes are a million bitty moves. It’s not about one big sexy move that makes the whole thing happen. It’s all about attention to the details. Knowing the music. Getting things set up right in the first place. Robert talked about the Big 3: System Coherency, Mix Coherency, and Performance Coherency. Without those happening, it all falls apart. Day 1 was primarily about getting your system together. Day 2 & 3 were more about getting a coherent mix and performance. So what do I mean by that? Here’s one example. Let’s say you have a stage that’s 20-30 feet wide–like ours. Your drummer is banging away on one side keeping the band in time while there are other folks on the other side. Those other folks are 20-25 feet away, and sound does not travel at the speed of light. It will take the rhythm 20-25ms to reach those other performers, and now they’re out of time with the rest of the band. So what do you do? Well, if you had been there you would have been part of the discussion….

Things like these are issues I’ve already been addressing through the use of time aligning backline to the frontline mics, using IEMS, etc. This week I’m going to take alignment a few steps farther in making sure I get everything lined up as much as possible. After Scovi’s discussion of comb filtering, I’m a comb filter freak now. I spent some time this afternoon re-aligning our subs to our top boxes. Part of this was due to some new tricks on doing this, and then part of it was due to a Venue configuration fix that Scovi helped me finally fix.

I’ve been using a 2nd compressed drum bus for a while now. This is sometimes referred to as “upward compression” or “parallel compression” or even sometimes “New York compression.” One of my biggest dilemmas was getting things running through that squash bus to get into the subs. With the subs driven from an aux, I had resigned myself to the fact that I just couldn’t get the kick in there. Then Robert let me look through one of his Venue show files, and he showed me how to fix this with a Matrix. You just setup a Matrix and put your sub-drive in and then add the drum squash bus to that matrix as well. So simple. I feel stupid I never figured out how to do this before. When I was playing around with it today, it was a definite improvement towards what I’m trying to get the drums to do.

Another area I’m experimenting with this week is how I handle gain structure. I was playing around with it this afternoon, and I can tell it’s going to be a challenge to break my old habits. Scovi’s initial approach isn’t that different than mine with the goal to get a really good signal level with your channel faders around unity so they sit in the sweet spot of the channel’s throw. His approach differs from mine here in that he uses RMS metering. I’ve been using Peak metering, but I’m going to play around with RMS for a bit. If I can get used to it, RMS will probably be a better way to go because it displays your average signal level in addition to the peaks. Seeing the average will most likely lead to better record levels. The next part of Scovi’s gain staging is where he takes a completely different approach.

With all those hot signal levels, it is important to offset things to keep from overdriving the master bus. I’ve typically done this through VCAs in the past. This has worked fairly well for me, but it hasn’t always been ideal because I also like to mix off the VCAs. There have been times where I’ve had to pull guitar VCAs down quite a bit to sit in the mix which also takes their faders out of the sweet spot making it harder to mix off the VCAs. Scovi’s approach is to group things and do the offsets with groups. Then you leave your VCAs at 0 and reassign them for specific needs per song, cue, etc. There are several advantages to this. If the VCAs are all at 0 when you reprogram them, your baseline mix won’t change, but now you can get mission critical channels directly in front of you. Grouping instruments into “stems” also gives you some options in processing those groups together. For example, do you find yourself EQing most of your vocals in relatively the same fashion? This way you could EQ the group with your standard stuff and make finer tweaks to the individual vocalists. If you’re DSP challenged, this can be a great workaround for you.

I’m going to play around at rehearsal on Wednesday with the groups along with some other little things. I’ll let you know how it all goes.

TweetShare
If you enjoyed reading this post, please share it!
A Million Bitty Moves: Complete FOH Engineer in Action