I get asked about this almost every time I post a photo of our FOH console so hopefully here’s all the info you want to know about our keyboard mount.

A lot of guys put their console’s keyboard in a drawer underneath; I’ve also seen this in probably every road case I’ve come across. But I don’t like the keyboard underneath the desk because I’m always naming things and putting notes in snapshots so I like having it more readily available.

When we first installed a VENUE at my old church in Chicago, one of our volunteers found an old swing-arm monitor mount that we had the keyboard on to the side of the console. Working with that I got very used to swinging the keyboard out over the console to type something and then moving it out of the way. I just found it very convenient so when I got down to North Point I wanted something similar especially since the console was positioned a lot lower than I was used to. You already had to hunch over to mix if you were standing and the keyboard under the console was uncomfortable to use while standing. Plus I believe we were always banging our knees on the drawer that was there.

I initially looked for another monitor mount like we had in Chicago, but everything I could find was really expensive at the time so I found something else to accomplish the same kind of idea. I currently have keyboards for all of our auditorium VENUE’s mounted to the side of the console on a flexible mount so the keyboard can almost “float” over the console. I’ll say that not everybody likes them this way but I do, and since I’m the one who sets everything up this is the way they’ve been.

The mount itself is a RAM mount I ordered from E-Mount.com. If you click on the link it should take you right to a selection of similar setups to what I have. I believe we’re using the 19″ version, but it’s been so long since I bought it I don’t remember for sure.

It’s basically a flange I screwed into our countertop with a black rubber-coated gooseneck that screws into that. Then there’s a double-jointed ball/socket assembly that connects to the gooseneck. I bought a cheap keyboard at Fry’s and popped the bottom off to attach the mount. If memory serves, I drilled holes in the keyboard’s underside and then used zip-ties to secure it. That sounds a little ghetto, but it’s held up for probably 9 years now. You can see the mount in action in the photo below. Including the keyboard I’d guess the whole thing cost less than $100. 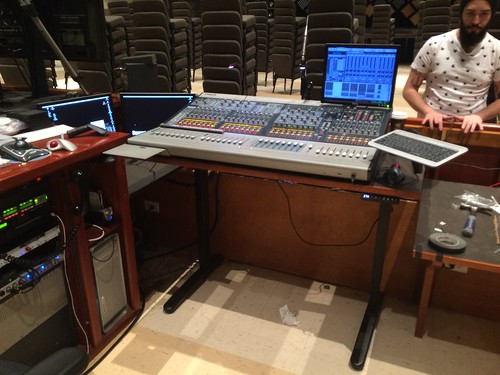 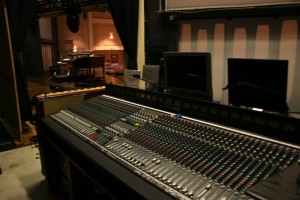 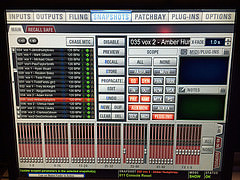 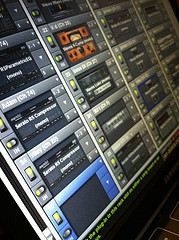 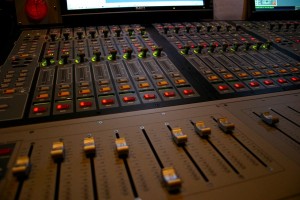