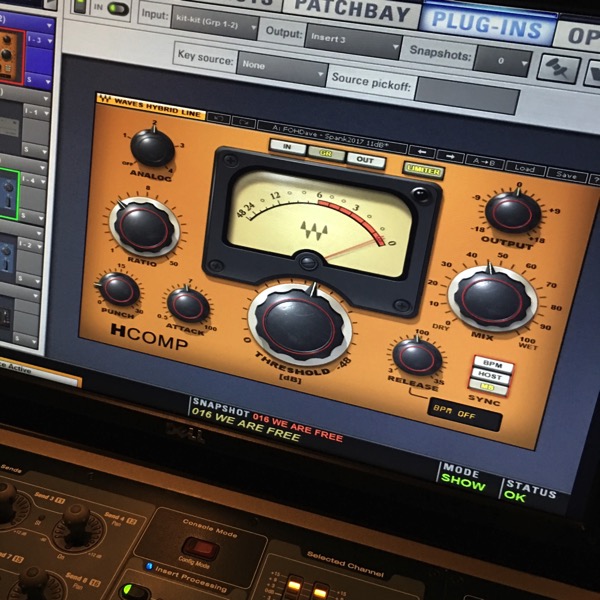 September 27, 2017 David Stagl
Off
Audio, State of the Mix
Share This

I haven’t done one of these posts in a long time, but today I’ve got something that’s new for me. On a recent gig I started doing something I thought I would never do: I used the wet/dry knob on a compressor for parallel compression.

Historically I have always preferred doing parallel compression using independent groups and sometimes even independent inputs. I think it offers more flexibility and control of things doing it this way. Plus, I believe it is just part of the sound. However, that additional control also adds a small level of complexity in terms of setup and sometimes mixing.

For example, one challenge with this approach is the very simple act of turning the overall drum level down in a mix. Turning the inputs down is troublesome since the parallel compression is post-fader, and when you pull the inputs back it effectively raises the threshold on the parallel compression which in turn changes the character and balance of things. Keeping the balance of the groups while pulling them back isn’t always so simple, either. Since the fader throws are logarithmic, if those faders aren’t close together, the relative balance between the two groups grows wider as the faders come down.

Now, in most cases this has never been a big deal for me, and I feel like I’m exaggerating an extremely minor issue just by mentioning it. I mean I’ve been using parallel compression for over a decade now so if it was rough going I would have dumped the method long ago.

Lately, though, I’ve found myself in mixing situations on a more regular basis where minor challenges have mattered more than I’d expect. I think this is largely because over the last two years of mixing FOH in a purely freelance capacity, I have seen inconsistent amounts of three things I’ve relied on in the past: time, technical flexibility, and talent.

When it comes to time, I rarely find myself in FOH situations where I have dedicated rehearsals anymore, and the time spent rehearsing before services and events seems to only grow smaller. For example, just this last weekend 30-45 minutes of soundcheck and rehearsal time was lost to recurring technical issues with a computer being used for playing tracks. Technical issues aside, it’s increasingly rare to find myself able to get the best pre-service scenario where I can really get an ideal number of passes at a mix. Polish and refinement for me really comes down to time, so losing time means compromising approaches and results.

On top of the the reduction in time, I also find myself with growing technical limitations. Technical limitations aren’t new, but it’s interesting to me how they have changed. Ten years ago input limitations were the largest obstacle I encountered, but these days it’s flipped and output busses are often the limiting factor. I frequently find myself in mixing situations these days where in-ears are being handled from FOH which often ties up busses I would use for other mixing duties forcing me to compromise my methods. Add to that a growing need for different mixes for hallways, videos, assisted listening devices, online streams, and sermon CD’s, and before long there just aren’t a lot of busses left for the FOH mix.

Finally, there’s the talent variable. While I still work with some amazing players, I also find myself working with inexperienced players a little more often these days. There’s nothing wrong with this because everyone has to start somewhere, but newer players still have a lot to learn about performing. For example, getting a great sound out of a drum isn’t just about hitting it with the proper force at the right time; it also depends on the way the drum is hit and how the stick comes off the head. A lot of the younger guys I’ve been working with haven’t figured all this out, yet, so the source being played is often inconsistent in terms of performance and tone. And when the source isn’t quite where I’d like it to be, there’s only so much I can do in terms of engineering decisions. You can easily start chasing your tail on any inconsistent sound, and I find this an easier trap to fall into when your setup becomes more complex since you have so much more to chase down to fix things.

When I did my video on drum parallel compression, I was surprised at how close I could get my the results using a wet/dry knob on the compressor. Part of my hesitation towards doing this regularly is because the parallel compression I use on drums involves more than just compression. For me it’s really a chain of processing done in parallel that includes compression, saturation, and EQ. The compression just does most of the heavy lifting. I knew from my own experiments that the results of using a wet/dry knob approach wouldn’t quite be the same, but I figured it was worth giving a true test in a real world scenario if it could simplify things in some situations.

So on my last FOH gig, I dumped my normal “Spank” group for a single group of all my drum inputs minus the overheads and hi-hat inputs. In this case, I inserted Waves’ NLS, the Waves H-Comp, and finally the Bombfactory Pultec emulation I often use on the original spank group. I dialed in a bit of saturation, loaded and tweaked one of my parallel compressor presets for the right wet/dry balance, and then dialed up a little less than half of what I normally do with the Pultec.

The results definitely worked. They weren’t quite what I normally get from a sonic standpoint, however, the workflow benefits made up for it this time. Having everything on one fader simplified things in a situation where I just didn’t have enough time to linger on getting a drum sound. This approach isn’t going to replace my traditional approach in every case, however, I think I’ll be trying it a little more often when I’m in one-off’s and run-n-gun FOH situations. It might also find regular use with younger players as well. I think in the end, I’m just happy that I have another approach I can use to continue achieving similar results when I’m working in different contexts.