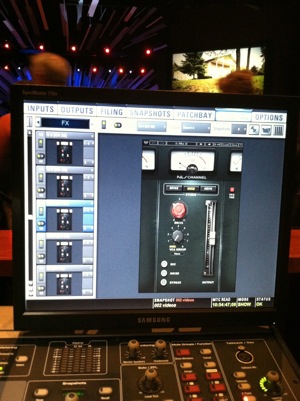 I want to pick back up on the analog-style stuff. Last time out I looked at some measurements of a couple analog-style plugins. I think the measurements show that these plugins can be a little more complex than they sometimes appear on the surface which can make entering the analog-style waters seem a little daunting if you start thinking too hard about all this. If you’re sitting around worrying about whether you’re adding 3rd order harmonics or what the specific tonal curve of something is or what’s the best plugin to use, I think you start missing the point. So I want to start moving towards some practical stuff to approach these. Today, might be a bit of a rabbit trail, but I feel like there are some things I should address.

I think, in general, there is a misconception about analog audio. If you dig up a dictionary, you can suss out that analog does not mean exact. Analog means LIKE. Analog audio is not perfect or exact audio. What you put in is not exactly what you get out, and that’s not necessarily a bad thing.

Part of the idea of using analog-style plugins is to create a non-linear environment for audio. In some ways this makes the console a little more of an organic thing because not every input will respond exactly the same. There are a lot of guys out there–including me–who believe all of these little, subtle differences and even imperfections actually impart beneficial effects on a mix.

The thought behind these plugins is to bring some of that into the digital realm by emulating actual classic pieces of gear. However, something to consider when trying to listen to these types of plugins is that the equipment they are attempting to emulate was sometimes designed with the intent of being as transparent as possible.

Yes, you read that correctly. As audio technology evolved throughout the 21st century, many designers were often striving towards making their equipment as transparent/clear/natural/pure/etc. as possible especially when it came to consoles.

If you’ve read the same volume of articles and interviews with veteran engineers as myself, you have also probably stumbled on complaints about this mythical, vintage analog audio technology that is all the rage these days. Here’s one particular quote taken from the book How Does It Sound Now?:

I was never really a big fan of analog. I remember thinking–back when there wasn’t any other option, I didn’t know what digital was other than digital delays–but I remember thinking, “Man, there’s got to be something. I hope something comes along that’s better than this.”

And why did engineers dislike analog? Because they would have a killer sound out in their studio, but when they put it through the machinery it would come back different from the original source. In fact, in the case of analog tape, everything is in a constant state of deterioration. Tape changes with every playback and not for the better. Part of the dream of digital audio back in the analog days was to be able to get things sounding closer to the source.

And now we’ve come back around to analog. Bob Clearmountain even goes on in that interview to talk about how most of his favorite records were all done analog so go figure. Analog. Digital. These are two different worlds we live with, and our opinions regarding both may waffle back and forth.

Analog style plugins are often digitally simulating equipment designed to not have a sound that still has a sound. Basically, when implementing these plugins in similar fashion to their inspirations, we probably won’t hear massive swings in the sound and character of audio. Oh, and we may or may not like what they do depending on the year, time of day, humidity, our marital status, phase of the moon, etc.

When you’re listening and experimenting and comparing your impressions of these plugins against the interviews and ads and forum posts, try and get past the hype. Just listen and make up your own mind. Remember that engineers often describe their perceptions with different scales. A game changer for one engineer might be barely audible to another. And what you don’t hear today might also burn a hole through your eardrum tomorrow.

In the case of these plugins, if you haven’t done a lot of work with analog gear or with an engineer who really knew how to get certain sounds out of analog gear, you might have a hard time tuning your ears up to what’s happening at first. As an intern, I was fortunate to work with an engineer who demonstrated why it was OK to light up the clip lights on the 2″ machine at times.

Next up, I’m truly going to get into a practical way I approach experimenting and implementing these types of plugins.