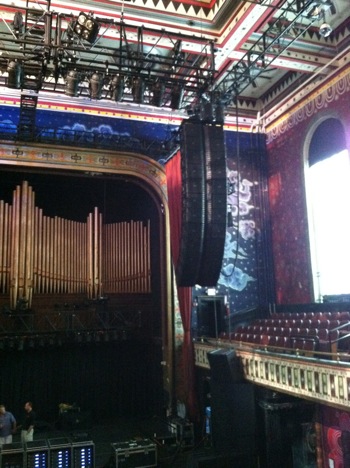 I recently had the opportunity to check out a demo of JBL’s next generation of line array, the VTX series, at the Tabernacle here in Atlanta. I knew going in to the demo that the first box in the VTX line, the V28, would be too big for either of my rooms. However, I’m always interested in hearing new loudspeaker lines especially in the case of a new system because I also know that it’s only a matter of time before a successful line expands into a wider variety of sizes.

What made the experience interesting is I had actually already heard the VTX rig a couple weeks before the demo at a show. It turns out that the Tabernacle installed the VTX rig earlier this year. Based on that show alone, I wasn’t impressed. In fact, if I had know that the rig in the air that night was VTX, I wouldn’t have bothered driving down for the demo. But I’m glad I did get down for the demo.

The Tabernacle is a hard venue for a demo like this. After being in the room a couple times now with the rig, I feel safe in voicing my opinion that I feel it’s one of the poorest PA implementations I’ve encountered in a long time. There is no horn coverage under the balcony on the floor, barely any horn coverage on the first balcony directly under the upper balcony, and then no coverage in the upper upper nosebleeds. We were talking about this the other day and would guesstimate it’s possible that 40% of the audience area is outside the coverage of a horn.

It’s not a huge room, but it’s a rectangular room so with these massive 12 box hangs almost against the wrap-around balcony. It’s pretty evident just from listening that the PA puts a ton of energy into the walls. The venue is an old church and has a great vibe which makes this a real shame because getting the right system in there could have really tightened up the room and taken it to the next level for some really special experiences. I’m very curious why the decision was made to put in this particular rig in this way because the installer is respectable, and there’s always a reason for this sort of thing. But the room is definitely not doing the rig any justice. I, for one, will probably never buy tickets for a show in there as long as that rig is up because I like clarity when I go out to listen to things.

But enough about the venue. Let’s talk about VTX and how I was actually able to hear it.

We arrived in the middle of the demo which was audibly rattling the venue’s stained glass windows in the parking lot. We were a bit surprised the windows were still in one piece.

Initially the JBL folks were using the house arrays for the demo with some subs they brought in; the Tabernacle isn’t using the new VTX series subs. The system gets really really loud as I expected, and I immediately heard an improvement in the subs because they weren’t exhibiting the telltale sound of over-excursion I’d heard at the show a couple weeks ago. It was also impressive to hear just how low the tops could go with the subs off. Of course, I still wasn’t overly impressed because it was hard to get a real idea of the system with it pounding the walls of the venue. I walked all over the room trying to get inside the critical distance of the PA and just couldn’t do it even getting as close as I could to the bottom of the array. I asked the JBL folks to turn one array off on the house rig which helped a bit, but the room was still a big problem for me.

Fortunately, the guys rolled out a single box on top of a single sub sitting center stage. With the speaker away from the walls and firing at a lower, but still respectable level, I could finally hear the actual box.

Now I’ll admit I haven’t been a big fan of the Vertec stuff. I’ve heard my friend Ed Crippen make one sing, but outside of him they’ve always been a mixed bag for me. However, after listening to VTX, I feel confident in saying that it’s a bit of a different animal and JBL is moving in a good direction.

Once I got to hear a single box I was satisfied with what I was hearing. The horizontal coverage isn’t excessively wide, and it was pretty consistent within the pattern which is very good. The top end was nice, and the JBL rep talked a bit about the work they’ve been doing in driver design to minimize/eliminate harmonic distortion at high frequencies. I thought the box also sounded much more balanced frequency-wise than the Vertec stuff I’ve heard in the past.

Any loudspeaker demo like this, even in an ideal situation, is only half of what I need to really form an opinion, though. Listening to reference tracks is a good place to start, but I really need to dig in and mix on something to form a real opinion. Based on what I was hearing, though, I felt I could most likely get results to my satisfaction mixing on the system. If I walked into a gig with a properly implemented VTX rig, I’d be happy. After the demo, I’d definitely be interested in putting a mix together on the system, too. I think JBL has a good system here, and I’ll be watching to see where it goes next.

Now let me put this in perspective a little. Based on the show a few weeks ago and the demo I heard, I didn’t feel like VTX is quite at the level I’ve gotten used to with the Meyer Sound stuff we use, some of the newer L’Acoustic stuff I’ve heard like K1 and ARCs, and even some of the d&b rigs I’ve heard and mixed on. Of course, where budget doesn’t allow any of those other three manufacturers, VTX will be a great solution. In the hands of a good to great engineer, there will probably be some killer shows mixed on VTX that might make some guys think twice about those other three manufacturers as well. I would feel very comfortable putting VTX on a rider with my current favorites.

Overall, it also just makes me feel good to hear how JBL is upping their game. My gut is this is going to be a popular PA over the coming years. I’m also really glad to know that if I see VTX hanging when I walk into a show, the boxes shouldn’t be the limiting factor in the success of the show.

So one last little thing about the demo. Towards the end of the day, one of the other engineers checking out the boxes had some really great reference tracks nobody had really heard before. So the JBL guys switched back over to the main rig and really cranked it up. While the tops were loud, they weren’t stabbing my forehead with the loudspeaker icepick that sometimes comes out to play. But what was really kind of cool was I could feel a breeze from the PA. No joke. Despite what local journalists might say, I don’t mix in situations where that would necessarily be applicable. But it was pretty cool.

2 Responses to “Feeling the Breeze”

TweetShare
If you enjoyed reading this post, please share it!
Feeling the Breeze
We use cookies to ensure that we give you the best experience on our website. If you continue to use this site we will assume that you are happy with it.Ok